Jeff Corwin is a world renowned nature and animal conservationist who has hosted numerous National Geographic and Discovery nature orientated shows. With highly acclaimed shows such as Corwin’s Quest, the ‘Jeff Corwin Experience’ and ‘Ocean Mysteries’ now showing on ABC Jeff is one of the world’s best known animal conservationists and TV hosts. Jeff Corwin has bachelor science degrees in biology and anthropology in addition to a master of science in wildlife and fisheries conservation.

In March 2015 TV presenter and nature conservationist Jeff Corwin visited Thailand to assist in the ongoing Giant freshwater stingray at the Mae Klong River with VRMC from Chulalongkorn University in Bangkok.

Fishsiam was asked to provide several Giant freshwater stingrays for scientific examination for a forthcoming ABC TV show entitled Ocean Mysteries. With only a few days at his disposal Jeff Corwin accompanied by Dr.Nantarika Chansue and the VRMC scientists based themselves at the Maeklong River setting up a field laboratory. 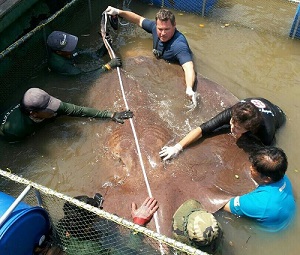 All Giant freshwater stingrays were examined on site with blood, DNA and toxicology tests being conducted in addition to all specimens being tagged and all other relevant data being recorded.

After bringing the monster Giant freshwater stingray to the surface and netting the fish it was clear the stingray was a really big female.

The Giant freshwater stingray was transported to the riverside were it was given a scientific examination with ultra sound revealing the stingray to be pregnant.

Further examination revealed the stingray to be a recapture previously caught on another research trip with Zeb Hogan in 2009.

Measurements showed the fish to have a record breaking 2.4m width measurement and a length of 14ft from tip to tail. Records showed that the stingrays width had increased by 0.4m in a period of six years between captures indicated a healthy growth rate.

The Giant freshwater stingray was not weighed but was estimated to weigh in the region of 300-350kg making it a firm contender for possibly the largest freshwater fish ever landed on rod and line.