The Fish That Time Forgot

Home Our Media Contributions The Fish That Time Forgot

The giant freshwater stingray (Himantura Chaophraya) is found in various river systems throughout Thailand and S.E Asia and is reputed to reach weights exceeding 1,000lb (450kg). The giant freshwater stingray is a serious contender for the largest freshwater fish on earth and is one of the least studied creatures on the planet. With very little known about this prehistoric predatory fish and very few documented captures it is truly a fish shrouded in folklore and legend.

The Giant freshwater stingray was first formally described in 1989 and there has been very little scientific research concerning this mysterious prehistoric predator.

The Giant freshwater stingray is a fish almost lost in time with ancestry dating back to a prehistoric age before the appearance of man. With so little known about this elusive and nomadic predatory giant and with so few reported captures it has been classed as vulnerable on the IUCN red list. It is believed this species is threatened by industrial and agricultural pollution in addition to the building of dams which block the mighty ray’s migratory and possibly breeding habitat.

This nomadic and highly understudied ancient predator is one of the largest living Dasyatids (whip-rays) family of fishes left on the planet. The Giant Freshwater Stingray belongs to the class Chondrichthyes, which includes all 850 species of sharks, rays, skates, and chimaeras. These fishes have cruised the oceans since the Paleozoic era. The basic dorsoventrally compressed body plan of the ray is thought to have originated during the Jurassic period, approximately 100 Mya. This design, coupled with a lack of a swim bladder and powerful jaws designed for crushing hard shells of molluscs such as clams and muscles, has made the ray the successful benthic predator it is today. The Giant freshwater stingray is found throughout the great river systems of Thailand in freshwater and estuarine enviroments and is possibly the largest freshwater fish on the planet. 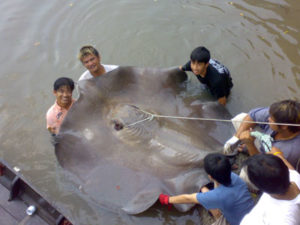 At the front of the pronounced body section small protruding ‘periscope’ eyes are located allowing it a limited field of vision of the water column above whilst buried in the muddy riverbed. Behind the eyes is the spiracle area often referred to as the ‘sixth gill’ which acts as a primitive type of snorkel. This adaptation allows them to breathe more easily while they are hiding in the substrate.

The Giant Freshwater Stingray has a dark brown surface on its upper/dorsal side with a highly abrasive textured skin covered in placoid scales, the tiny tooth-like structures that protect the skin of elasmobranchs and give it a sandpaper-like texture. The creature’s underside is of a very smooth nature characteristically white in colour with a grey to brown colouration around the edges. A huge cavernous mouth is located on the underside lined with highly abrasive crushing pads. Jelly-filled sensory pores “Ampullae of Lorenzini”, located on the skin around the nose and mouth on the underside of the disc, are present in most elasmobranchs and allow sharks and rays to detect minute electric fields generated by living things. This is especially useful for freshwater stingrays because it helps them to hunt down prey that might be buried in the riverbed or hiding in murky water. In addition two rows of five gill slits are located on the underside/ventral side of these prehistoric predatory giants.

The Giant Freshwater Stingray is armed with two venomous barbs located close to the base of its tail which have two components: the sharp inner barb used for piercing, and a thin sheath surrounding it that contains the venom. When the spine is deployed, the barb pierces the venom sac along with the victim’s skin, and the poisonous slime is introduced into the wound. The barb is extremely sharp (it has been known penetrate bone), and it operates under the same principle as an arrowhead– it slides into flesh fairly easily, but the serrated edges make it very difficult and painful to extract. The tail is very flexible and can move in any direction within a split second, inflicting serious damage. In addition to causing great pain, the venom contains enzymes that cause tissue death.  Similarly to the teeth or dorsal spines of a shark, stingray spines are thought to have originated from placoid scales, the tiny tooth-like structures that protect the skin of elasmobranchs and give it a sandpaper-like texture. Placoid scales, just like shark teeth, are lost and re-grown on a regular basis.

Determining the sex of these mighty living fossils is a relatively easy exercise with male specimens displaying obvious genitalia called claspers similar to those of a shark at the base of the tail. Female specimens are easily distinguishable by an absence of genitalia in this region.

The Giant freshwater stingray is the ultimate predatory fish and is arguably the largest freshwater fish in the world. In an exchange of information with Zeb Hogan from mega fish project an organization funded by the WWF and other concerned agencies I asked if the Himantura Chaophraya was indeed a true freshwater fish. Zeb informed me that it has never been confirmed and that it was possible these creatures might venture into marine waters.

There are many unanswered questions concerning these highly mysterious underwater dinosaurs which swim in some of the wildest and most unexplored waters on Earth.

Fishing in Thailand for Giant freshwater stingray is a highly adventurous undertaking requiring the strongest of equipment and the most determined of anglers.

The wild and daunting tidal rivers that these ancient creatures inhabit are truly wild and unexplored waters, with turbulent currents caused by daily tidal invasions and depths reaching twenty metres in parts. Giant freshwater stingray typically inhabit large rivers such as the Mekong, Ban Pakong, Maeklong and Nakon Nayok River in addition to several other river systems throughout the Kingdom of Thailand. The sheer size of the river systems that Giant freshwater stingray inhabit coupled with the nomadic movements of this mighty species make location a key factor. 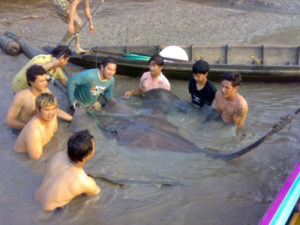 On hooking a Giant freshwater stingray the angler will be tested to their absoloute physical limit with long protracted battles of several hours in duration.

The awesome power displayed by these creatures during these epic battles is legendary with the Giant freshwater stingray characteristically embedding itself in the muddy riverbed creating an unmovable deadweight on the bottom.

The long protracted nature of the battles whilst fishing for Giant freshwater stingray require numerous anglers to take turns in hauling these mighty creatures  from the riverbed.

I would describe these epic battles as the ultimate test of ‘Men vs. Beast’!

At the time of writing the Fishsiam team has accounted for twenty–five individual captures of Giant freshwater stingray with fish estimated to weigh in the excess of 220kg+ (484lb).

The Fishsiam team is currently conducting research on this most fascinating of creatures and sharing information with the mega fish project and various other scientific organizations in an effort to gain a greater understanding of this most obscure and understudied species.

My description of fishing in Thailand for Giant freshwater stingray would be that it is the most demanding form of freshwater angling I have ever experienced for what is possibly the largest freshwater fish on the planet! The adrenaline filled battles coupled with the breathtaking scenery and the myriad of wildlife found on these tidal rivers makes this what I would describe as the ultimate in freshwater angling experiences.