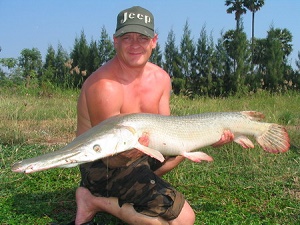 The Alligator Gar has been imported into Thailand and is naturally found in the Ohio, Mississippi and Gulf Coast Rivers reaching as far south as the Mexican coast in its native habitat.  The Alligator Gar is particularily prevalent in the Trinity River and its tributaries near Huston, Texas in the USA where it has been recorded at record breaking weights to 166kg.  This huge prehistoric predatory monster fish species has a sleek stream lined pike-like form and huge elongated snout closely resembling an alligator and is a highly aggressive freshwater predator feeding on all manner of live and dead fish.
The fearsome Alligator Gar is the largest member of the Gar fishes and holds the title of the largest exclusively freshwater fish found in Northern America.
The highly predatory Alligator Gar is equipped with a dual row of razor sharp teeth on its upper jaw which it uses to literally rip its intended prey apart.
The Alligator is covered in a heavy chain mail plating of interlocking (ganoid) diamond shaped scales further adding to its menacing and predatory appearance.

The Alligator Gar displays a brown or olive colouration throughout its dorsal surface (upper body) with darker flecked markings serving to camouflage its appearance along its flanks.

The prehistoric Alligator Gar is an ancient freshwater monster fish species which is capable of spending prolonged periods of time out of the water.
This most hardy of monster freshwater giants is threatened by the macabre practice of Bow Fishing throughout its natural range in addition to habitat destruction.

The Alligator Gar is an evolutionary master piece that is equipped with a primitive buoyancy bladder connected directly to its throat giving the Alligator Gar the ability to draw atmospheric oxygen from above the water.

This amazing anatomical adaption makes the Alligator Gar particularily susceptible to Bow Fishermen who target these freshwater giants as they bask in the upper layers.

This crocodilian predator favours slow moving backwaters, lakes and bayous of large rivers and often enters brackish and salt-marine waters in search of prey.
The Alligator Gar is an adept ambush predator that launches savage attacks whilst lurking amongst reeds and other aquatic vegetation.
Mature Alligator Gar move into flooded wetlands and inundated flood plains annually in which they spawn.

The Alligator Gar has featured in various TV documentaries including National Geographic, River Monsters and Fish Warrior and is rapidly gaining popularity to sport fishing enthusiasts from around the world seeking to do battle with this freshwater Megafish.

The awesome Alligator Gar is a prehistoric freshwater monster fish species that has been introduced into various lakes and fisheries throughout Thailand in the last few decades by fish farmers and can be caught at a variety of fishing locations throughout Thailand.  Fishing in Thailand for Alligator Gar is becoming increasingly popular amongst international anglers who are drawn to this most aggressive and prehistoric of monster fish.