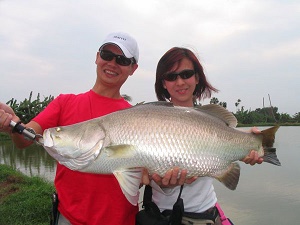 The Barramundi is found in both fresh and brackish water and has a wide range covering the Indian Oceans coastal waters from the Persian Gulf to Indonesia, China, Australia and the Philippines.  The Barramundi is a member of the Perciformes (perch-like fishes) family and is an extremely voracious and aggressive predatory sport fish.
The word Barramundi is a loan word taken from Australian Aboriginal language meaning ‘large scaled river fish’ and is the premier estuarine sport fish of Australia.
This species is tolerant of both fresh and torpid water conditions and are not a migratory species. The Barramundi is both a salt and freshwater sportfish that is found in variety of waters ranging from coastal waters, lagoons, estuaries and rivers.
Barramundi subsist on an a varied diet of mollusks, crustaceans and smaller fish in addition to displaying cannibalistic behaviour, the smaller juvenile Barramundi begin feeding on zoo plankton in their early stages.
The Barramundi is a euryhaline species which inhabits freshwater and brackish rivers and descends to estuaries and coastal flats to spawn. Most large specimens are female due to the Barramundi being a hermaphroditic species which changes sex from male to female after the first season of spawning.
The Barramundi is a highly energetic and acrobatic fighting fish and is highly prized by lure fisherman across the globe.
The Barramundi has a fearsome predatory appearance with large predatory eyes well suited to sight hunting for live prey.
The Perch-like Barramundi is covered with a rough mesh like armouring of silver scales which vary in colouration according to the environment of the fish.
Mature adult Barramundi display a grey to green dorsally with silver coloured flanks and a white coloured underside.
Younger juvenile Barramundi display a light brown colouration with a distinctive white strip running from their dorsal to snout.
The Barramundi has a pointed head and pronounced concave forehead with a large hinged extended jaw running from behind its eye.
The Barramundi has pronounced dorsal and ventral fins composed of spines and soft rays which are coupled with pectoral, pelvic and a rounded tail composed solely of soft rays.
This species is of great international economic importance and is raised in aquaculture in Australia, Malaysia, India, Thailand, Indonesia, USA, Israel and Poland where it if farmed extensively for human consumption.
The Barramundi has been introduced into Thailand for over twenty years where it has become an extremely popular eating fish and has been extensively farmed throughout Thailand has been stocked into various fishing lakes and ponds throughout the country reaching weights of 15 kg’s.
The Barramundi has become a very popular sport fish in Thailand with visiting lure fishing anglers fishing for this species by design in order to experience the hard fighting battles and exhilarating aerial displays that this amazing sport fish is renowned.