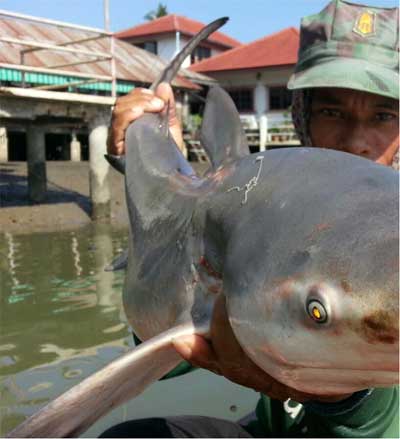 The Bull Shark is a member of the Carcharhinidae family of fishes which include Tiger Shark and Black tipped Reef sharks.

Bull sharks are widely distributed across the globe from the Americas, Asia and Africa.

This aggressive shark species favours warm shallow waters down to depths of 150m, but is commonly found at depths of 30m.

This highly developed shark species has the ability to thrive in both saltwater or fresh/brackish water through a process called osmoregulation and can be found in coastal waters in addition to tidal rivers.

Bull sharks can be found in various tidal riverside in Thailand such as the Maeklong or Bang Pakong.

This shark species has been documented to have travelled 4000km up the Amazon River in Peru.

The Bull Shark is named due to its aggressive nature, snub nose and stocky body.

Bull sharks are commonly found in the estuarine reaches of tidal rivers in Thailand where they are born in brackish water conditions before venturing out into the sea.

The Bull shark has been recorded at lengths of over 3m with weights to 350kg.

They feed a wide variety of prey which includes bony fishes, stingrays and birds, in addition to crustaceans and turtles.

The Bull shark utilises its bulky frame inwhat has been described as a ‘bump and bite technique’ in effect ramming into its prey and stunning it.

This highly aggressive shark species due to its preference for shallow coastal waters and rivers has been described as being one of the top three species to attack humans , due to the possibility of its close proximity to beaches after the Tiger shark and Great Whit shark.

Attacks from from this species in Thailand are an extremely rare occurrence.