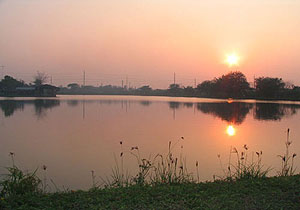 IT Lake Monsters Predator fishing Lake in Thailand is situated in Ratchaburi province some 120 kms West of Bangkok. IT Lake Monsters in Thailand is a relatively new lake (2008) dedicated to predator angling stocked with an impressive head of both native and imported predatory species.IT lake covers an area of 12 rai / 5 acres and has varying depths ranging between 2-6 metres.The Predator Lake is a scenic lake surrounded by lush farmlands with wide open banks suited to fly and lure casting. There is little cover around the lakeside with the exception of the dining area on one side of the lake, so anglers are advised to wear long sleeved shirts, hats and sun glasses when angling at this venue.

The lake benefits from a spectacular stocking of various predatory species with Arapaima Gigas reaching record breaking weights thought to approach 180 kgs in addition to a multitude of other imported predatory species including Arowana, Redtail Catfish, Alligator Gar , Barramundi and various Amazonian Sorubim species all attaining massive weights. This venue also contains various native predators with a large head of Chaophraya Catfish various Snakehead and Featherback species also present in its depths. With such a high stocking density this venue can be described as a highly prolific predator destination capable of producing large multiple captures on a regular basis caught on both live and deadbait tactics. Recent visits to the Predator Lake have seen it respond well to various fishing techniques including lure fishing, live / dead baiting and fly fishing methods.

IT lake Monsters has basic W.C and shower facilities and has an on site shop serving a basic range of refreshments with a large sheltered building affording the angler(s) some shelter from the sun.

Accomodation is available a short distance from the lake at a variety of reasonably / budget priced hotels.

IT Lake Monsters is a commercial fishery which is open for predator angling daily between the hours of 6am-18.30pm.

angling producing between 10-30 monster fish of various monster freshwater species. This venue is suitable for novice and experienced anglers alike and offers the visiting angler the opportunity to fish Amazon freshwater species and native species whilst in the Land of Smiles.

IT Lake Monsters is not solely for predator fishiing fans and has a good stock of rarely caught Giant Siamese Carp which can be targeted instead of using lures in the morning.

At the time of writing a new lake has been constructed which will be devoted to carp species and catfish and is currently undergoing a stocking program. Mekong Catfish to over 100kgs have already been stocked in addition to lots of fast growing Giant Siamese Carp and other carp and catfish species. 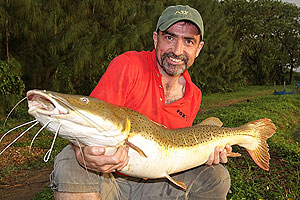