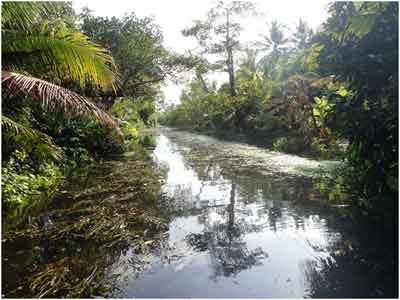 Explore the vast and intricate network of canals in the Amphawa district of Samut Songkran fishing for various wild native species against a stunning backdrop of rural Thailand.

Our Amphawa canal fishing tours are well suited to adventurous anglers wishing to fish for wild native species in an authentic rural setting. The intricate system of canals intersperse the nearby Maeklong River and are bordered by various settlements inhabited by locals. The Amphawa floating market is situated nearby and is well worth a visit when visiting the canals.
Various native species are present with Snakehead, Archer fish, various freshwater and saltwater catfish, eels and all manner of other native species.

Our daily or multi day trips to the Amphawa canal system see the angler collected by air conditioned Toyota innova or minibus and transported to the sleepy village of Amphawa.
The duration of the journey from Bangkok is 1.5 hours and a distance of 85 km’s.
On arrival (approx 07.00am) anglers will board a small boat with captain and guide, before beginning their exploration of the canals. Anglers are equipped with light spinning outfits and lures suited to this delicate style of fishing before being taken to some of the quieter khlong’s (canals). On occasion when the situation dictates small prawns, worms or fish baits may be used to target the various species lurking in the canals.

The guides we use at the Amphawa canal are all seasoned local natives who have lived and fished these canals all their lives and who have a vast knowledge and understanding of the canals system.

Anglers are advised to wear long sleeved shirts, sun block and glasses as on some occasions they may be spending extended periods without any shade.
Quite often after being transported to a likely fishing spot the captain will cut the engine before paddling silently into the area with oars.
Whilst fishing at the Amphawa canal you will be mesmerized by the lush jungle like surroundings, with an eclectic mix of flora and fauna combined with an abundance of natural wild life such as monitor lizards, fish eagles and all manner of other tropical creatures.

As with all wild fishing expeditions you will never know what species could be biting next and what size it could be. Our Amphawa canal fishing tours do not offer the chance of catching monster fish as at a lot of our other venues, but instead allow the angler to immerse themselves in the real rural Thailand amongst a stunning backdrop of tropical scenery whilst fishing for wild native species not often seen in commercial fishing parks.

Generally at midday a visit to the Amphawa floating market for lunch gives the angler a respite from the midday sun.

Whilst fishing at the Amphawa canals anglers can expect to encounter various wild Thai fish species with Snakehead, catfish, eels and Archer fish regular captures.
Our daily tours normally end at 17.00 pm when the angler is collected and transported back to Bangkok.

The daily fishing tours can be extended to multi day trips or can be combined with various other packages that we offer in this region.