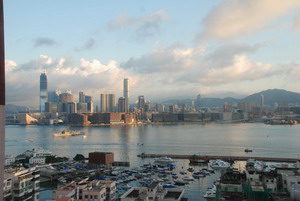 country before passing through central Bangkok and then emptying into the Gulf of Thailand.  This river is also know as the River of the Kings and is formed at the confluence of two of the countries other main rivers the River Ping and River Nan in Nakon Sawan Province. From the central plains of Nakon Sawan the river flows in a southerly direction for some 372 km’s before reaching Chainat and Bangkok. On reaching the riverside settlement of Chainat the river then splits into its main course and the Tha Chin River which flows parallel with the Chaophraya before emptying into the Gulf of Siam in Samut Sakon.
The main tributaries of this river are the Pa Sak River, the Sakae Krang River, the Nan River and the Thachin River which are in turn fed by smaller tributaries such as the Wang River and various other khwae (minor tributaries). This extensive tree-like pattern of interconnecting waterways covers a large part of central Thailand with none of the river or its tributaries extending beyond the countries borders.
The Chao Phraya watershed is the largest watershed in the country covering 35% of the nations land with the river passing through some of the most densely populated and historically significant cities such as Nakon Sawan, Uthai Thani, Chainat, Singburi, Ang Thong, Ayutthaya, Pathum Thani, Nonthaburi, Bangkok and Samut Prakan.
The Chaophraya River in its lower tidal reaches is spanned by several large bridges and widens as it passes the dominating skyline of the skyscrapers and hotels of downtown Bangkok.
The river in downtown Bangkok is a bustling waterway filled with every manner of boat from small water taxi’s right up to ocean going vessels laden with heavy cargoes. The heavily urbanized lower reaches of the river in Bangkok are lined with factories and industrial plants which are interspersed with rustic shanty-like dwellings housing local fishermen and various other local inhabitants.

This river has previously produced gigantic Giant Siamese Carp, Catfish and Giant freshwater stingrays to local fishermen but has been widely overlooked by sports fishing enthusiasts. The daunting and massive Chaophraya River System represents the ultimate challenge to adventurous anglers fishing in the land of smiles wishing to explore this river and its many tributaries in search of true River Monsters. Although we do not run daily tours to this incredible venue it is possible given enough planning and forethought to arrange trips to this vast tidal river.