The Mae Klong or Maeklong River is situated in western Thailand and is Thailand’s premier stingray fishing destination. The Fishsiam Thailand teams success whilst stingray fishing at this mighty tidal river has been well documented in the international media and has seen us capture hundreds of monster stingrays including several Giant freshwater Stingrays of world record proportions. The Maeklong River in Thailand originates deep in Kanchanaburi province at the confluence of the River Kwai Yai (big) and River Kwai (noi) scene of the infamous ‘Death Railway’ in World War Two where countless POW’s and Asian workers lost there lives.The river then continues its journey slowly meandering through Ratchaburi province before ending its journey in a wide estuary in its lower reaches at Samut Songkran where it joins the Gulf of Thailand.
This Maeklong River is 145kms in length and is intersected by hundreds of canals (klongs) and waterways. The lower reaches of the river at Samut Songkran receive two daily tidal influxes which alter the rivers depth and flow considerably. The Maeklong River in Samut Songkran is situated one and a half hours west of Bangkok and is the location of a large estuary where the Gulf of Thailand meets this massive tidal river.
The lower reaches of the river aka Area 51 are a place of immense natural beauty and are host to a wide variety of freshwater and marine fish in addition to a host of other exotic wildlife, flora and fauna. The famous Damnoen Saduak or Amphawa floating market is situated in the lower reaches of the Maeklong River and is a well worth a visit whilst in the area.

The Maeklong river in its lower reaches in Samut Songkran is bordered by a multitude of sacred Buddhist temples some dating as far back as 400 years and is truly a magical destination. In its murky depths lurk some of the largest freshwater fish in the world such as Giant freshwater stingrays and other monster fish.

The Giant freshwater stingray is the most desirable fish in the Maeklong River and has drawn anglers and scientists from all over the world in search of what has widely been described as the worlds largest freshwater fish species. 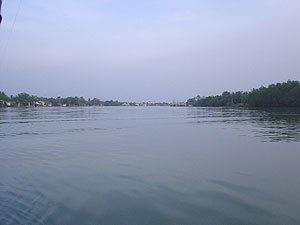 Our stingray fishing trips to the Maeklong River have seen us capture over 500 different Giant freshwater stingrays culminating in the capture of a massive stingray with Jeff Corwin which was estimated to weigh 350kg’s.

In an effort to conserve the Giant freshwater stingray population in the river we operate a strict catch and release policy and observe a three fish limit per boat each day. 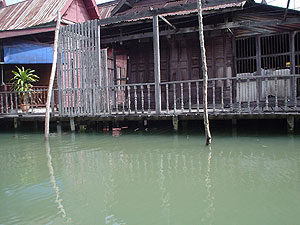 Fishing times on the river are dictated by lunar phases and tidal predictions which allow us to time your fishing trip to coincide with the best fishing times and conditions in which to catch Giant freshwater stingrays.

Stingray Fishing Maeklong River in Thailand can be arranged on a daily or weekly basis and can be combined with our other Thailand fishing venues to create your own bespoke fishing holiday.